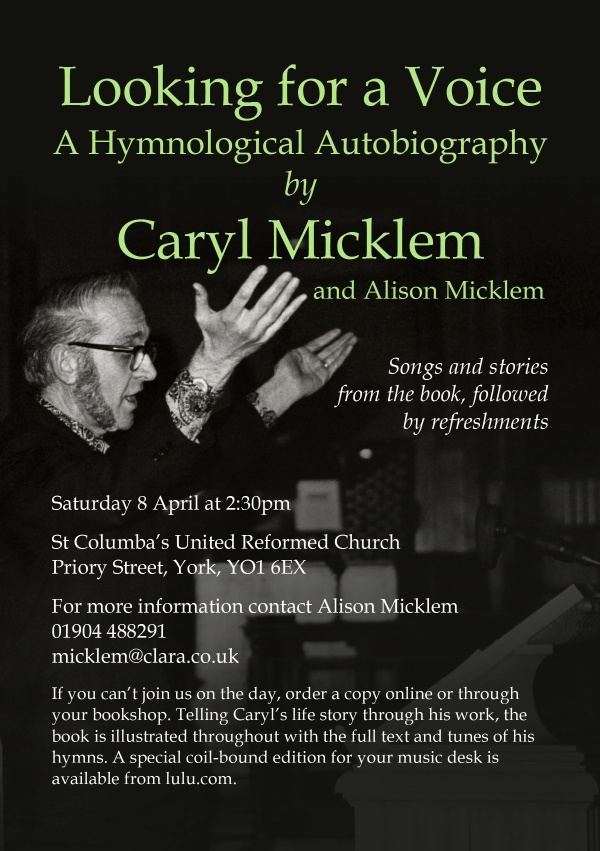 Another event, on this occasion for those of you who live in York, its environs, or within easy travelling distance. Also the opportunity of a new book!

The book launch of Looking for a Voice: A Hymnological Biography by Caryl Micklem and Alison Micklem will take place on Saturday 8th April at 2.30 pm

Caryl Micklem was a gifted hymn writer and composer, he was also Chair of The Hymn Society of Great Britain and Ireland from 1993-1999.  A minister of the United Reformed Church, formerly Congregational, he was a member of the original committee for the Methodist hymn book, Hymns and Psalms 1983, He also served on the editorial committee and was Convener of the music advisory sub-committee for Rejoice and Sing 1991. Caryl retired with his wife, Ruth, to the village of Pocklington on the outskirts of York, where he died in 2003. Caryl’s daughter, Alison, a URC minister now serving in York, who is also a member of The Hymn Society of Great Britain and Ireland has, with information from Caryl, compiled Looking for a Voice: A Hymnological Autobiography. The book tells the story of Caryl’s life through his work and is illustrated throughout with the full text and tunes of his hymns; a book to look forward to!

Available to order through your local bookshop
or Online from lulu.com (it will appear in their listings shortly)

In addition, there will be a special spiral bound version, much better for music desks, but for some reason these do not have an ISBN number.

If you are unable to attend the launch on April 8th there will, for those attending our Carmarthen Conference in July, be another opportunity to hear Alison when she will be presenting a Sectional about the book and, hopefully, copies will be available.

Day 27 is from Martin Leckebusch who reflects on They Set Out On Their Homeward Road written by Fred Kaan to the tune WYCH CROSS by Erik Routley. "The Biblical passage behind his verses comes from the final chapter of Luke: the account of two disciples on the road to Emmaus on what, at the start of their journey, they hadn’t accepted was the day of Christ’s resurrection, the first Easter day..." hymnsocietygbi.org.uk/2021/07/they-set-out-on-their-homeward-road-martin-leckebusch/ ... See MoreSee Less

They Set Out On Their Homeward Road: Martin Leckebusch

Day 26 of our 'Hymn of the day' reflections is from Matthew Rushton on 'Earth’s fragile beauties we possess' by Robert Andrew Willis. "In the opening verse we are centred immediately on the Passion of our Lord. We are invited to acknowledge his suffering and the connection between human experience of tragedy and need and the cross of Christ..." hymnsocietygbi.org.uk/2021/07/earths-fragile-beauties-we-possess-matthew-rushton/ ... See MoreSee Less

Day 25 comes from Jonathan Halliwell and a reflection on 'Let all mortal flesh keep silence' written by Gerard Moultrie, (1829-85) from the Liturgy of St James and is fitting for today which is celebrated as St James' day in some churches. hymnsocietygbi.org.uk/2021/07/let-all-mortal-flesh-keep-silence-jonathan-halliwell/ ... See MoreSee Less