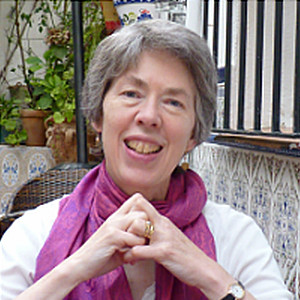 Many congratulations to Executive Committee member Anne Harrison on receiving the Thomas Cranmer Award for Worship from the Archbishop of Canterbury at a ceremony in Lambeth Palace, London, on Friday 9th June.

The citation for the Award to Anne is set out below:

Anne Harrison – The Thomas Cranmer Award for Worship for her sustained and outstanding contribution to music in worship.

Having studied music at Oxford University, Anne Harrison taught music in London before moving to the Cambridgeshire Fens, and then to Durham where, in the mid-1990s, she became Music Co-ordinator at St John’s College with Cranmer Hall. This included time with ordinands, notably teaching a weekly ‘Preparation for Worship’ session with the liturgist, the late Michael Vasey.

She was co-ordinating editor of the Royal School of Church Music’s quarterly ‘Sunday by Sunday’ for ten years until 2012, during which period she received an Honorary ARSCM and completed an MA in Music and Liturgy at Leeds University.

Anne has been active in both the local RSCM and the Diocesan Liturgical Committee – leading Taizé services in Durham Cathedral and helping to shape courses and conferences bringing together music and liturgy.

Her two Grove Monographs – ‘Sing it Again: The Place of Short Songs in Worship’ (W176) and ‘Recovering The Lord’s Song: Getting Sung Scripture Back into Worship’ (W198) highlight two of her key interests: repeated short songs in worship (especially from the Taizé and Iona Communities), and sung Scripture, such as her Benedictus setting, published in ‘Common Worship Daily Prayer’.

Anne chaired the Editorial Group for ‘Sing Praise‘ (2010) and was a member of the editorial team for ‘Ancient and Modern’ (2013), both sub-titled ‘Hymns and Songs for Refreshing Worship‘.

She is a member of the Committee of the Hymn Society of Great Britain and Ireland and of the Group for the Renewal of Worship,
and a trustee of the Song and Hymn Writers’ Foundation. She writes on music, hymnody and song for ‘Praxis News of Worship’.
Her contribution has been outstanding.

We are looking forward to "seeing" you all at our first virtual conference which will run on Tuesday 16th, Wednesday 17th and Thursday 18th November. Please join us from 11.00 - 12.00 on all three days - or even for just one or two! Each session will consist of our usual Short Metre presentations of 10 minutes with plenty of time for you all to contribute to the discussion via the chat. The subjects covered will, in the true spirit of The Hymn Society, be wide ranging. Andrew Pratt and Anne Harrison will be talking about contemporary hymn writers and Alison Robertson will be introducing her own hymns. Two anniversaries will be celebrated with Martin Leckebusch discussing the work of James Montgomery. Janet Wootton will be talking about the legacy of "Amazing Grace" a full 300 years after the hymn was first written. Gillian Warson will look at how hymns are used in the children's novels of the "pioneer child" Laura Ingalls Wilder.All you have to do is settle down with a cup of coffee and join in with the discussion. Please register you interest here: hymnsocietygbi.org.uk/resources/short-metre-2021/ so that we can send you a reminder nearer the time.The event is free to attend, but a donation of £7.00 will be used to finance bursary places at future conferences. ... See MoreSee Less

Ahead of Cop26 - shared with the author's permission.CREATION SONG(or ‘SONG FOR PLANET EARTH’)Tune: Hyfrydol 87 87 D1. Thank you, God, for all creation,sun and moon and stars above;fertile earth and mighty ocean,rushing wind and gentle dove;burning flame and cooling water,breath of God that gives us life;rainbow colours painting nature,filling senses with delight.2. As your people, we are stewardsof this world which you have made.But our lack of constant caringmay become the price we’ve paid.For its beauty and your creaturesmay not now survive our greed,if we cannot work togetherin this hour of nature’s need.3. As your oceans are pollutedand your icecaps melt away.As our selfish need for progresscauses chaos in its sway.When the breath of God is poisonedand your forests are laid bare;we destroy all nature’s balanceand the creatures in our care.4. Holy Spirit, move among usas you did at Pentecost.Fill us with a new desireto redeem what may be lost.Give us minds to see more clearlyall the changes we must make,so your creatures may still flourishand your planet re-awake.5. Let your people stand togetheras we speak a common tongue:words of caring and commitment -‘Let us make your kingdom come’.For creation’s heart is groaningand the time is ‘now’, not ‘when’.Time for action and for healing,let all people sing ‘Amen’.Text © Jan Brind 2003, 2010(from ‘Creative Ideas for Whole Church Family Worship’ – Jan Brind and Tessa Wilkinson published by Canterbury Press 2011) ... See MoreSee Less
View on Facebook
· Share

A glimpse of another era... The all-male choir and pupils of the Royal Hospital School, Holbrook, Suffolk, sing some of the 'big' Public School hymns and choral anthems in their impressive chapel, back in 1965.Apart from what might be considered a few eccentricities (relating to the period), this must be some of the clearest, most tuneful singing from such an institution that I know.In particular, the sound engineers have done well to let us hear the mighty, west-end Hill, Norman and Beard (1933) in a greatly resonant acoustic, without it overpowering the singers. ... See MoreSee Less