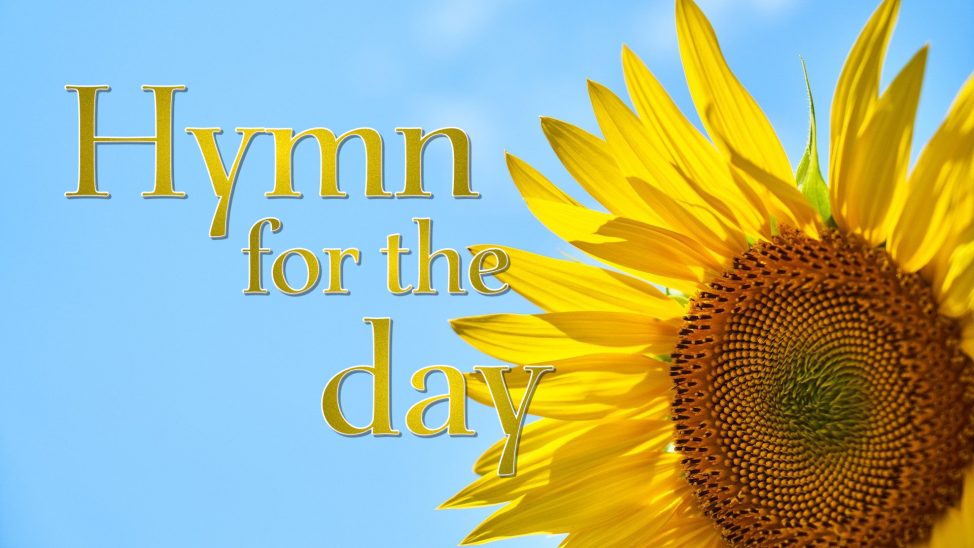 For possible further resources for this text and many others please visit www.jubilate.co.uk

This hymn, written by Christopher Idle, has been a favourite of mine for twenty years. It expresses the wonderful paradox of Jesus, set out in Mark 14: 42-45, that he turns the usual structure of power on its head: if we want to be great, we must be servants.

What attracted me to the hymn first was its second verse. I had found it in my copy of Hymns for Today’s Church (London: Hodder & Stoughton, 1982) , and in 1999 I turned to it when I was collecting hymns and songs which rejected violence, to make a collection to record on CD for the Anglican Pacifist Fellowship. The lines “You never used a killer’s sword to end an unjust tyranny” were just what I was looking for, but also set this nonviolence into the wider context of Jesus’s life and teaching.

In my hymnbook, Chris’s text was set to the tune SPLENDOUR by Michael Praetorius. It is a fine tune, but I wished to set the text to the folk tune O WALY WALY for the APF recording, so I wrote to Chris asking for his permission to do this, which he gave. The CD, entitled “Finest hour” is, now that I look back on it, an odd collection, mixing sacred and secular songs, my own and other people’s, but I learned a lot from assembling it.

Looking up this hymn in Chris’s collection of hymn texts, Light upon the River (Carol Spring, IL: Hope Publishing Company, 1998), I found that it was written partly as a response to a theological work, On being a Christian (London: Collins, 1977) by Hans Kung. Kung pointed out that great leaders generally fit into one of four categories: the king (splendid, regal), the revolutionary (a ruthless warrior), the hermit (holy, ascetic, withdrawn from the world), or the politician (clever, subtle, perhaps devious). Jesus, however, transcends all these categories, and will fit into none of them.

The hymn unpacks this idea in clear and compelling language. In the first verse, we are reminded that Jesus had none of the trappings of greatness: crown, robes or “powers of state”.

In the second, we recognise that although he used no physical violence, his word was and is an effective weapon. (Paul, in Ephesians 6:17, would later refer to the word of God as the sword of the Spirit.)

The third verse calls to mind the criticism Jesus often received, especially from the Pharisees, for not being “holy” enough, for failing to keep all the religious rules and for mixing with disreputable characters. (See Mark 2, when Jesus is at Levi’s house.) He shared the vulnerability of ordinary people, and he is not inaccessible to us, whatever our station in life.

The fourth marvels at the way Jesus could cut through the dishonesty of those who tried to catch him out with loaded questions.

The whole hymn is in the second person, addressed to Jesus himself, and listing the ways in which the singer recognises that Jesus is exceptional. In the fifth verse, however, it moves to the realisation that he came “to be what we were meant to be”: we should all try to live like him. (The final line “To pay for our perversity” was later changed by Chris to “A light for all the world to see.”)

This change of emphasis paves the way for the final verse to be a prayer which acknowledges our need of Jesus, and looks to him to direct and empower us. When I sang this for the CD, I moved up to a higher key for this verse, as the culmination of our prayer, which both asks for help from Jesus and commits us to finding in him all that we need and desire.

I chose July 8th as my preferred day for this hymn, as my father was born on July 8th 1920, so this would have been his hundredth birthday. He encouraged me in my early years, both in faith and in music. He also gave me, in 1985, my copy of Hymns for Today’s Church in which I found this hymn.

My Lord, you wore no royal crown;
you did not wield the powers of state,
nor did you need a scholar’s gown
or priestly robe, to make you great.

You never used a killer’s sword
to end an unjust tyranny;
your only weapon was your word,
for truth alone could set us free.

You did not live a world away
in hermit’s cell or desert cave,
but felt our pain and shared each day
with those you came to seek and save.

You made no mean or cunning move,
chose no unworthy compromise,
but carved a track of burning love
through tangles of deceit and lies.

You came unequalled, undeserved,
to be what we were meant to be,
to serve instead of being served,
a light for all the world to see.

So when I stumble, set me right;
command my life as you require;
let all your gifts be my delight
and you, my Lord, my one desire.