At the dawning of creation
David Fox (1956-2008)
© Copyright of this hymn is presumed to reside with The United Reformed Church, 86 Tavistock Place, LONDON WC1H 9RT. However, if you have knowledge of an individual or organisation claiming copyright, please contact The Hymn Society of Great Britain and Ireland.

Tune: SHIPSTON
English traditional melody collected by Lucy Broadwood (1858-1929)
It was originally harmonised by Ralph Vaughan Williams (1872-1958), first appearing in The English Hymnal (1906) where it accompanied two hymns: ‘Firmly I believe and truly’ and ‘Jesu, tender Shepherd, hear me’. 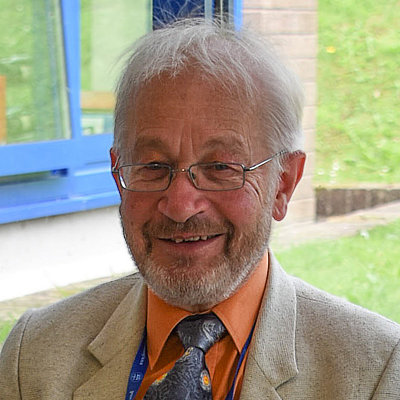 David Fox was Welsh to the core; born at Pontypwl, Monmouthshire in 1956. At University College London he gained a B.Sc. and spent a period teaching chemistry. Following studies at Mansfield College, Oxford he was ordained into the United Reformed Church (1983), serving his entire ministry in Wales. Then in 2008, on a solitary walking holiday in Slovenia, he went missing, eventually presumed dead, although his body was never found. The congregation at Penarth United Church, Vale of Glamorgan, where he had served for seven years, was preparing to celebrate his Silver Jubilee in ministry but, sadly, it was not to be. Little more is known about David who had no known relatives. His family was the churches he served where he was widely and hugely respected; an excellent theologian, minister and wonderful pastor who brought comfort to many; he was also a writer of hymns.

In 1993 I was privileged to spend a brief period with David at Westminster College, Cambridge where he was on sabbatical, studying liturgical settings of the Psalms; I remember a modest, self-effacing man possessed of an arid wit!

David’s first collection of hymns Thy Various Praise (the title taken from Isaac Watts’ hymn ‘My God, my king, thy various praise shall fill the remnant of my days’), contained 26 hymns written between 1983 and 1986. His second collection, Thy Various Praise, Hymns 1983 – 1985 contained 67 hymns, including those in the original collection. David also, as a Welsh-speaker, published a collection of 24 Welsh hymns together with his own English translations. All the books were self-published and none, characteristically, carries any biographical information. Only the first has an introduction which includes these words:

The basis of Christian hymnody is the Word of God in scripture, and many of these hymns are written in direct response to that word. Some, in paraphrase pattern, keep close to the very words of scripture, others wander further afield and take their imagery and inspiration from other sources.

Disappointingly, only three of David Fox’s 67 hymns have entered main collections; there is a lot of treasure still awaiting discovery!

‘At the dawning of creation’ is in Rejoice and Sing (1991), Sing Praise (2010) and Ancient & Modern (2013) set respectively to CROSS OF JESUS, LONG LANE and RESTORATION. It is also in several Kevin Mayhew books to CROSS OF JESUS. SHIPSTON also works well as in the YouTube link below. Written on 30th April 1985, it is a delightfully simple, though not simplistic, baptismal hymn. However, its heading, ‘Water Means Life’, given in the original collection, retained in Rejoice and Sing, hints at a wider remit. The four verses faithfully follow ‘the Word of God in scripture’ chronologically and sequentially.

One month before, on 30th March 1985, David Fox wrote another hymn which may in part have evolved from his scientific understanding and training. In some ways it forms, on a broader canvas, a prelude to today’s hymn:

The universe, to God
in silence sings its praise,
to echo Love’s divine abyss
through all its silent ways.

From this unimaginable breadth of the universe in silent song, the first verse of ‘At the dawning of creation’ shifts the focus to that moment ‘when our world began to be’, as recorded in Genesis 1: ‘In the beginning God created…’; remember, though, that link forged at the beginning of John’s Gospel, which also permeates this hymn: ‘In the beginning was the Word…’. When the world began to be, the dry land finally emerging, ‘God called forth the world’s foundations from the deep chaotic sea’.

In verse 2 the spotlight falls on that pivotal ‘water moment’ in Exodus as, through the parted waters of the sea, Israel emerged a nation as surely as the breaking of waters is integral to every human birth. The Christological link becomes explicit ‘then the parting of the waters of the living water spoke.’ Jesus said to the Woman at the Well: ‘If only you knew what God gives, and who it is that is asking you for a drink, you would have asked him and he would have given you living water.’ (John 4:10)

The imagery in the third verse is especially rich. First is the familiar picture from Numbers of Moses in the desert striking the rock to produce gushing water to quench the thirst of the rebellious Israelites (Numbers 20:7-11). Second, intriguingly because less familiar, is the little-read story of Ezekiel’s vision of a trickle of water seeping from the side of the Temple but broadening and deepening at an astonishing rate until it became a torrent; wherever it flowed trees flourished and fish imbibed life and thrived (Ezekiel 47:1-2,4-9). From the side of the Temple the imagery leaps to the side of Jesus, pierced by a soldier’s spear, issuing a flow of blood and water, as he hung dead on the cross (John 19:34). Earlier (John 2:19-22), Jesus had spoken of ‘the temple’ of his body.

Very little life can thrive without life-giving water. Water can divide, but as verse four assures us, it is through Christ the Living Water, through his life of love, service and sacrifice, that we are bound together and, by extension, with humankind and with the whole creation.

Come Holy Spirit, power of God’s creation,
hope of the world, our human inspiration,
spark, deep within us, fires of re-creation.
Spirit, renew us!

Come Holy Spirit, help us share the vision
of all creation healed of its division,
in God united and in Christ forgiven.
Spirit renew us! Amen.

At the dawning of creation