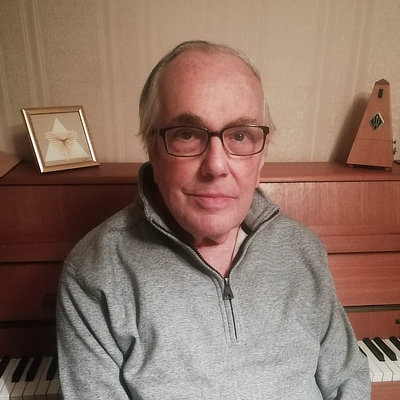 Fierce raged the tempest o'er the deep,
watch did thine anxious servants keep,
but thou wast wrapped in guileless sleep,
calm and still.

“Save, Lord, we perish!” was their cry,
“O save us in our agony!”
Thy word above the storm rose high:
“Peace, be still”.

The wild winds hushed; the angry deep
sank, like a little child, to sleep;
the sullen billows ceased to leap,
at thy will.

So, when our life is clouded o'er,
and storm winds drift us from the shore,
say, lest we sink to rise no more,
“Peace, be still”.

There are two storms in St. Matthew’s Gospel. The one in chapter 14 has St. Peter crying out, “Save me!” But in the earlier one, in Matthew chapter 8, all the disciples shout, “Save us, Lord”—and there is a hymn based on that, almost verbatim: Fierce raged the tempest o’er the deep. The same story appears in Mark, chapter 4 and Luke, chapter 8. All three echo passages in Psalms 89 (vv. 8-9) and 107 (vv.23-30).

This hymn was written by Godfrey Thring, who does not seem to have had to endure too many storms in his life. If we may say so, it seems to have been quite a comfortable existence. But nevertheless he was able to write numerous hymns which are characterised by their positivity and hopefulness. (Why do we no longer sing Thou to whom the sick and dying ever came, nor came in vain, to the tune REQUIEM?[1]It is beautiful, and has a very modern twist in the idea that “we are all in this together” —“On thy higher help relying, may we now their burdens share”).

From 1875 it took Fierce raged the tempest a long time to find favour, but then by the middle of the 20th century it was in 156 different hymn books before it suddenly fell from favour again. In 1907 Julian said it ranked as “one of Prebendary Thring’s most popular hymns . . . specially set to music by Dr. Dykes”.[2] It is not in the new A & M,[3] though, and I did not understand why, so I went straight to one of the Editors to ask him. He said that, when designing the new book, they each prepared lists of about 100 hymns in A & M New Standard[4] which they felt were expendable, and all agreed this one was rarely sung. My informant said one of its problems is that the tune ST AËLRED is too similar to RIEVAULX, which goes to Father of heaven, whose love profound.[5]Both tunes were written by J. B. Dykes specifically for their respective words. But the primary consideration in any hymn is the words, and I had not noticed anything in the words to suggest a clear 150 years of popularity, bookended by periods of neglect. Then I realised that the popularity of this hymn exactly coincided with the period from the Boer War to the Korean War. It was the period when the words of hymns meant something to soldiers in five major wars and their families.

But there are plenty of storms in life apart from military engagements. For sixteen months the world has endured the Coronavirus; the worst blows from that storm have afflicted everyone from individuals to whole nations. People with other illnesses have had their treatments postponed. People’s businesses have been threatened or destroyed; education has been disrupted. Alongside that there have been blocked canals; fires in refugee camps, hospitals and open countryside; volcanoes and earthquakes; refugees drowning in the Mediterranean Sea; social unrest concerning the legacy of slavery and racial tensions. Blessed indeed were those Health Service workers, parents, owners of pubs and small businesses, black footballers and lonely old people who, over the last sixteen troubled months could hear the words, “Peace! Be still!”

In the hymn, Jesus was actually present in person to quell the storm, but when he isn’t present in the flesh, we can still pray with the disciples, “Save, Lord, we perish”. With John Greenleaf Whittier, we can say, “Speak through the earthquake, wind and fire, O still small voice of calm”. Then, then can we identify with the passage in I Kings, Ch.19, vv. 11 and 12, so beautifully and succinctly summarised in Mendelssohn’s Elijah. ”And in that still voice, onward came the Lord”. Our Saviour. Our anchor, to hold onto in the storms of life.

This hymn was a favourite amongst my Junior School pupils when I was teaching. They sang it like a mini opera. Sheer melodrama! Explain the meaning of “guileless” and then they could understand every word of it. Even children know that we all experience storms in life. They could learn what a metaphor is while they were enjoying singing one. They could learn musical theory, too: agitated crotchets in the key of C Minor for panic; dotted minims in E flat Major for “calm and still”. Dramatic diminuendos as the wild winds hushed and as the waves ceased to leap. And in the process they absorbed a story from the Bible with relevance to their own lives.

Remembering that this hymn was popular amongst my pupils, it is perhaps appropriate to end with two short prayers from the 1927 Scout Prayer Book, which we used to use in the calm of the late evening at camp-fire. We quietly bring together in our hearts and minds all those, known to us or unknown, who are suffering, in danger or despair: The Queen; Prince Harry; exhausted doctors and nurses; staff and residents in care homes; the Police, here, in America, and elsewhere; teachers; those suffering from racial discrimination; refugees; people suffering in storms and other extreme climatic events.

Grant unto us, Almighty God, thy peace that passeth understanding, that we, amid the storms and troubles of this our life, may rest in thee, under thy care, guarded by thy love; so that with a quiet heart we may see the storms of life, the cloud and thick darkness, ever rejoicing to know that the darkness and the light are both alike to Thee. Through Jesus Christ, the Light of the world. Amen.

We thank Thee, O Lord our God, that Thou art in every place, and that no space or distance can ever separate us from Thee, that those who are absent from each other are still present with Thee. Have in Thy holy keeping all from whom we are now separated, and grant that both they and we, by drawing nearer unto thee, may be drawn nearer to one another, in Jesus Christ our Lord. Amen.