Glory and honour
Michael Perry (1942-1996), after Glory and Honour (ASB canticle drawing on Revelation 4 and 5)
© Mrs B. Perry/Jubilate Hymns 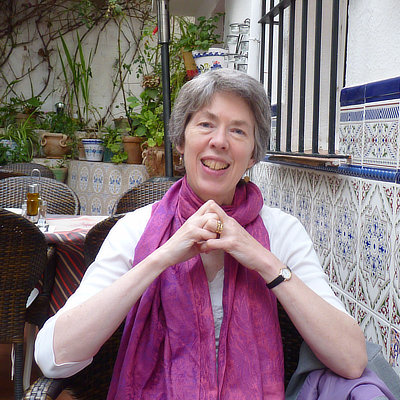 Glory and honour,
wisdom and splendour,
Lord of creation, are yours alone:
all of earth’s creatures
in exultation
sing to the Lamb upon the throne.

Once was the ransom
paid for our freedom –
from every nation with you we reign:
yours be the praises,
high veneration,
worship for evermore. Amen.

I love the vision of heavenly worship found in parts of Revelation, the last book in the Bible. The writer, John, describes a vision in which he sees a door opening in heaven and he is invited to go up and look around. The sights and sounds are amazing, of course, but the focus is on worship of the one sitting on a dazzling throne, and of a lamb, now alive but looking as if it had been killed. If you know the end of Handel's Messiah you'll be familiar with some of the words of chapter 5:

Then I looked, and I heard the voice of many angels surrounding the throne and the living creatures and the elders; they numbered myriads of myriads and thousands of thousands, singing with full voice,

‘Worthy is the Lamb that was slaughtered
to receive power and wealth and wisdom and might
and honour and glory and blessing!’

Then I heard every creature in heaven and on earth and under the earth and in the sea, and all that is in them, singing,

‘To the one seated on the throne and to the Lamb
be blessing and honour and glory and might for ever and ever!’ (Revelation 5:11-13, NRSV)

What a vision, in which all creation shares in the worship of heaven! When the Church of England published its Alternative Service Book in 1980, the contents included several scriptural songs for singing at morning or evening prayer, canticles which had not been in the traditional Book of Common Prayer. These, and more, make up a substantial canticle section in the most recent daily prayer patterns, part of the Common Worship project. Earlier, in 1973, the Church Pastoral Aid Society had published Psalm Praise, which included metrical paraphrases of a number of such biblical songs, including Timothy Dudley-Smith's 'Heavenly hosts in ceaseless worship' , from Revelation 4-5, and Christopher Idle's 'Here from all nations, all tongues and all peoples', from Revelation 7. Both were in metres which made it possible to sing them to well-known hymn tunes.

Bishop Timothy and Christopher Idle were both on the team which produced Psalm Praise; another member of that team was Michael Perry, who I think was serving his second curacy while the book was in preparation. He went on, as did many of the compilers, to work on Psalms for Today and Songs from the Psalms (collections both published in 1990 by Hodder & Stoughton, in association with the CPAS and the group of contributors and editors by now calling themselves Jubilate Hymns). The Preface to Psalms for Today is by Michael Perry with music editor David Iliff. They emphasise their insistence on competent music and well-crafted text for this publication, and Michael Perry's own versifications of psalms and canticles are scattered throughout the volume. These include my choice today, 'Glory and honour', which the author elsewhere described as a 'representation' of the canticle from Revelation. It had also appeared already in two other Jubilate collections, Church Family Worship (in 1988) and Come Rejoice (in 1989).

A number of leading lights among the original Jubilate writers and composers are, I'm glad to say, still with us, though others are now singing God's praise with the heavenly host. One loss particularly keenly felt by the group came early: Michael Perry died in 1996, at the age of only 54. Ironically, a collection of his hymn texts (called Singing to God and including 'Glory and honor') had just been produced by Hope Publishing in the United States, with a warm foreword by George Shorney which ends, 'as hymnwriters go [Michael] is relatively a youngster. Hopefully, this is just the first volume of hymns from this delightful person and this promising resource.' Sadly that hope was not to be fulfilled, but twenty-five years on from his death we remember with gratitude all that Michael Perry contributed to the renewal of congregational song within and beyond the Church of England, not least in the singing of scriptural paraphrases.

We don't have a recording of today's hymn text being sung, but you can listen to the usual tune which goes by several names: ASCALON, SCHÖNSTER HERR JESU, or—as it appears in Psalms for Today (164B)—SILESIAN FOLK SONG. And anyone who has access to a music copy of the hymn book Praise! will find Michael Perry's words set to a more song-like tune, TUDDENHAM by Victor Day, at number 481.

And so let us pray:

Glory and honour and power are yours by right, O Lord our God. We thank you for the privilege of sharing with saints and angels and with all creation in the song of heavenly praise. We bless you for Michael Perry and for all who turn to the Bible today as they craft words for worship. Inspire us with the vision of the Lamb upon the throne, and renew our singing in heart, mind and voice, through your Holy Spirit. Amen