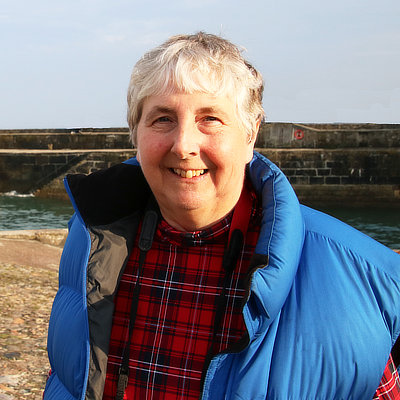 Name of all majesty,
fathomless mystery,
King of the ages
by angels adored;
power and authority,
splendour and dignity,
bow to his mastery,
Jesus is Lord!

Child of our destiny,
God from eternity,
love of the Father
on sinners outpoured;
see now what God has done
sending his only Son,
Christ the beloved One,
Jesus is Lord!

Saviour of Calvary,
costliest victory,
darkness defeated
and Eden restored;
born as a man to die,
nailed to a cross on high,
cold in the grave to lie,
Jesus is Lord!

Source of all sovereignty,
light, immortality,
life everlasting
and heaven assured;
so with the ransomed, we
praise him eternally,
Christ in his majesty,
Jesus is Lord!

‘Name of all majesty’, with words by my father, Timothy Dudley-Smith, is often sung to Bishop Michael Baughen’s beautiful tune, ‘MAJESTAS’, with an arrangement by Noël Tredinnick, who joined Bishop Michael at the All Souls, Langham Place piano during the composition. Other tunes include ‘NAME OF ALL MAJESTY’ by Malcolm Archer.

The hymn features in A House of Praise, part one of my father’s Collected Hymns.[1] It appears in more than 70 hymn books. There are translations in Chinese, French and Korean. Kingsway produced an audio version in their 1996 Tell out, my soul recording of my father’s hymns for ‘The Hymn Makers’ series.

My brother, James, and his wife, Becky, chose ‘Name of all majesty’ for their wedding. We sang it for my father’s 90th birthday at an Advent ‘Songs of Praise’, so it evokes special memories.

The text was written in 1979 at Seacroft in Ruan Minor, where our family spent wonderful holidays. My father would rise early to pore prayerfully over his Bible and write in his manuscript book, which contained snatches of text that had accrued during the year, ready to be honed into hymns in Cornwall. My father occasionally worked on a text at the beach, between a pasty lunch and an afternoon surf. I remember Bishop Michael Baughen’s family joining us for a shoreline picnic at St Anthony, near the Helford River.

My father, who had been enjoying the Collected Poems of Walter de la Mare at the start of 1979, notes that a page in his MS book

shows three extracts ... copied out for the sake of their metrical form.

‘Name of all majesty’ came to be loosely modelled on one of these. The 66 55 666 4 metre makes for short lines. Line one rhymes with line two; lines five, six and seven rhyme with each other. The fourth line always rhymes with ‘Lord!’ in line eight.

Christopher Idle describes the hymn as a ‘poetic exposition’ of the phrase, ‘Jesus is Lord’, itself one of the earliest baptismal creeds of the church. My father’s notes include three references, the first being Romans 10:9:

... if you declare with your mouth, ‘Jesus is Lord’, and believe in your heart that God raised him from the dead, you will be saved.

... at the name of Jesus every knee should bow, in heaven and on earth and under the earth, and every tongue confess that Jesus Christ is Lord, to the glory of God the Father.

The third text, 1 Corinthians 12:3, shows that no one can declare that ‘Jesus is Lord’ except by the Holy Spirit of God. This credal affirmation concludes every verse of the hymn. Each first line, however, presents its own reference to the Lord Jesus.

In Charles Wesley’s hymn, ‘Jesus! the Name high over all’, the Name is gifted to, and cherished by, sinners. ‘Name’ is the opening word of my father’s hymn, and a recurring theme in his texts. It is the focus of two of his collection titles: Praise to the Name and Above Every Name.[2] The second title echoes verses in Philippians 2 and Hebrews 1.

The Jewish people understood that God’s holy Name could only be uttered by the High Priest on the Day of Atonement. In our Christian Bibles it is often rendered as ‘the LORD’, ‘I AM’ or ‘I AM WHO I AM’ in Old Testament contexts, such as Exodus 3:14-15.

‘Majesty’ soon follows ‘Name’ in verse one of the hymn. Elsewhere my father explains that the word ‘majesty’ fits ‘the picture of the Lord reigning and returning’.

The prophet Micah (in Micah 5:4) surely links the two Testaments, for the One foretold will call himself the Good Shepherd;

He will stand and shepherd his flock in the strength of the LORD, in the majesty of the name of the LORD his God.

In verses two and three of the hymn we find Jesus our Saviour being born to die (as the Lamb of God) on Calvary’s cross for our redemption.

In verse four we encounter and acknowledge Jesus Christ as our risen, ascended and majestic Lord, the source of our immortality as his redeemed people. ‘We’ are mentioned specifically: in verse two we are encouraged to see ‘what God has done’ in sending Jesus his beloved Son to save us, and in verse four ‘we’ are consequently invited to praise Christ ‘eternally’ in the glorious company of ‘the ransomed’.

Yours, LORD, is the greatness and the power and the glory and the majesty and the splendour, for everything in heaven and earth is yours.

Provided to YouTube by Absolute Marketing International Ltd
Name Of All Majesty · The Orchestra Choir and Congregation of All Souls Church
The Hymn Makers: Timothy Dudley-Smith (Tell Out, My Soul)
℗ 1996 Integrity Music Released on: 2007-07-30