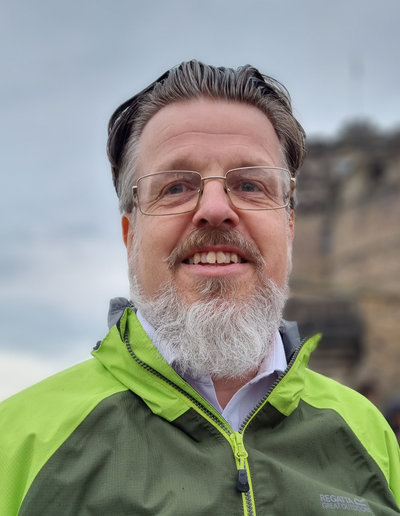 They set out on their homeward road,
the two disciples lost and sad,
re-living still the episode
when all was lost and life made bad:
an ugly cross had been the end
of Christ the perfect man and friend.

A stranger joined them as they walked
that he their company might share;
he listened to them as they talked
of broken hope and great despair.
And then the stranger made reply
that Christ the Lord was bound to die.

He spoke of Moses and his days
of Egypt and the promised land,
recalled the prophets and their ways,
the leadings of the father-hand.
At journey’s end, to food and rest,
they made him feel a welcome guest.

Invited in and honoured most
to take his place at table’s head,
the stranger-guest became the host
by saying grace and breaking bread.
Then suddenly they knew that Christ
had made their common meal a feast.

O Jesus, come again, we pray,
and share with us the things we do.
Be our companion on our way,
let Easter in our homes come true.
And let our life and work proclaim
the power of your living name.

When Fred Kaan’s “definitive” collection, The Only Earth We Know,[1] was published in 1999, I was disappointed to find that the author’s selection of texts for that book omitted “They set out on their homeward road”, a text I have liked greatly since I first encountered it in his 1985 collection, The Hymn Texts of Fred Kaan.[2]

There are, perhaps, two or three reasons why Fred decided that this one would not make the cut. First, by his own admission it was not an original, but rather an attempt to update a nineteenth-century hymn, “Lord Jesus, in the days of old” by James Ashcroft Noble (1844-96), an English teacher from Lancashire. (Incidentally, the two hymns share the same metre, and one suggested tune for Kaan’s words is WYCH CROSS, the melody Erik Routley composed for Noble’s text.) Secondly, the Kaan poem has not been hugely successful: while Noble’s hymn has found a place in a number of books, including one as recently as 2001, for the Kaan reworking one has to search out either the author’s first collection, mentioned earlier, or Pilgrim Praise from 1972.[3] And thirdly, it’s hardly Fred’s most polished or striking work: there are, if we’re honest, a few clunky lines and one or two awkward inversions.

Yet I’d argue that there are also good reasons not to abandon this particular hymn. To begin with, it’s a vast improvement on that Victorian predecessor, a hymn whose third verse begins, “Perchance we have not always wist …” Now there, surely, is a line destined to induce mirth among a congregation.

Besides that, this is a narrative hymn; it reads almost like a ballad. And I reckon we need more narrative texts today. Two and a half centuries ago, Charles Wesley could pack a hymn text with Biblical allusions and expect them to resonate with at least some of his singers. Only fifty years ago, we could probably be confident that even many occasional churchgoers would have had some basic familiarity with the key stories of the Christian faith: they were part of our cultural heritage. But now, in a generation for many of whom the Bible is a closed book, there must be room for a skilful re-telling of its contents as well as their application to discipleship today. And a third reason to keep this text in use is the delightful pun at its heart.

So what has Fred Kaan done here? The Biblical passage behind his verses comes from the final chapter of Luke: the account of two disciples on the road to Emmaus on what, at the start of their journey, they hadn’t accepted was the day of Christ’s resurrection, the first Easter day. The opening verse enters into the gloom those two felt as they trudged wearily away from Jerusalem: “lost and sad”, it says, mulling over the weekend’s tragedy. Then we have the unrecognised Jesus, joining them, listening sympathetically before he suddenly tells them—at the end of verse two—“that Christ the Lord was bound to die”, just as in Luke’s narrative.

Fred’s third verse brings us through the remarkable Bible study in which Jesus expounded the Scriptures to his intrigued companions, making their hearts burn though still they failed to recognise him; and the stanza ends with the offer of hospitality which brought Christ into the disciples’ lodgings. Then in verse four we have the denouement: the breaking of bread; the moment of recognition; the vanishing of the Lord who now lives beyond the regular constraints of time and place … and, in Fred’s lines, “the stranger-guest became the host / by saying grace and breaking bread.” There’s that pun: Christ who broke the bread was the living bread, the host in two senses of the word. And onwards: “Then suddenly they knew that Christ / had made their common meal a feast.” It’s typical Kaan: not quite a rhyme, but what a fresh insight into the events of that evening.

What is also typical Kaan is the final verse. In contrast to Luke, Fred doesn’t hurry us back to Jerusalem with Cleopas and his companion. Instead he brings the story to bear on the singers: “O Jesus … share with us the things we do. / Be our companion on the way …” The resurrection is made pertinent now, and we too must live in its light.

Lord Jesus Christ, on whose resurrection all history pivots, we thank you for the ancient prophecies fulfilled in your triumph; for the gospel records that make the event known; and for the modern words by which the story comes alive to us; and so we pray, with Fred Kaan, “Let Easter in our homes come true. And let our life and work proclaim the power of your living name.” Amen.